Colostrum is the pre-milk substance produced by a mother for the benefit of her newborn. So, in fact, it is the first super food all mammals receive.  The list of health benefits colostrum provides is extensive. For thousands of years, humans have used colostrum for heal.

Colostrum’s properties have been revered across many cultures: in ancient Chinese medicine it was considered a vital health-giving potion, and for the Maasai people of Kenya and Tanzania it has long been regarded as an important part of a healthy diet. In Britain, dairy farmers refer to it as beestings: traditionally, mother cows would be milked after feeding their newborn calves and any surplus colostrum was used to make an extra-creamy, and very healthy, pudding.

Colostrum is unique in that it loaded with immune factors, growth factors, protective proteins as well as contains all the nutrients a newborn needs to survive.  Scientists have been unable to recreate the properties of colostrum.  It is obtained by the “first milking” of a cow.

It is important to note that the US legal definition of colostrum allows any for any milk collected in the first 5 days to be “colostrum.” In reality, colostrum is significantly reduced by the 3rd milking and totally gone by the 5th. So a consumer should look for “First Milking” labeling, also look for a minimum of colostrum peptide (PRPs) content more than 3% by weight. Most of the colostrum at your local grocery store won’t meet these criteria. 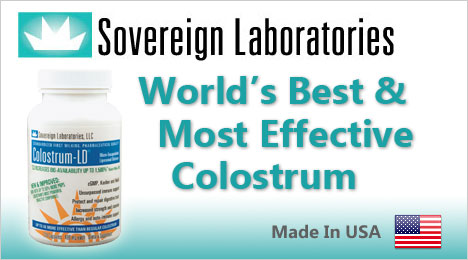 lostrum provides a potent array of immune factors including immunoglobulins, cytokines, interferon, lactoferrin and PRPs. It also contains MSM or methylsulfonyl-methane. Multiple human and animal trials indicate MSM may reduce oxidative stress and inflammation, although it is not itself a direct antioxidant. In human studies, MSM has been shown to protect muscles from damage by reducing the amount of oxidative stress damage. Animal studies indicate a liver protecting effect of MSM against several toxins including acetaminophen, paraquat, and carbon tetrachloride. Animal models of experimental colitis and pulmonary hypertension indicate a protective effect as well.

Colostrum has shown to be effective against an impressive list of pathogens including H pylori, implicated in ulcer formation, E coli, pertussis, cholera, C difficile and other bacterial causes of diarrhea. It has also been shown to be effective against a number of virus and even parasites. With these properties, you should seriously consider putting it into your travel emergency pack, to be used in case of traveler’s diarrhea for example.

Lactoferrin is one of the main proteins in colostrum, this prevents colonization by Haemophilus influezae, a common cause of ear and respiratory infections. Lactoferrin can penetrate cell walls of bacteria allowing immune lysozyme into bacterial cells, even Candida, so your body can dissolve their enemy targets more efficiently.

Proline Rich Peptides PRP (not to be confused with platelet rich plasma) is a complex mixture of peptides. It contains 25% proline residues and 40% hydrophobic (water fearing) amino acids. PRP possesses immunoregulatory properties, including effects on humoral and cellular immune responses, shows regulatory activity in Th1 and Th2 cytokine induction, and has the ability to inhibit the overproduction of reactive oxygen species and nitric oxide. PRP has also shown psychotropic properties. Both immunoregulatory and psychotropic properties suggest potential clinical use of PRP for neurodegenerative disorders. Beneficial effects of PRP in the case of Alzheimer’s disease were shown in double-blind placebo-controlled trials, in long-term open-label studies and in multicenter clinical trials.

Colostrum also contains a number of powerful antioxidants, including glutathione, as well.

I could go on much further, but suffice it to say that colostrum, like ghee, should be near the top of any list of “superfoods”.

The information on this site is solely for purposes of general patient education, and may not be relied upon as a substitute for professional medical care. Consult your physician for evaluation and treatment of your specific condition.